New Delhi: Bollywood actress Kangana Ranaut, who is an avid social media user, was recently papped outside a dubbing studio in Mumbai. But what caught everyone’s attention was the missing mask.

Kangana Ranaut donned a white kurta-palazzo and printed dupatta but hola! where was the mask? So, after a famous paparazzo Viral Bhayani posted the video on Instagram, television actor Suyyash Rai slammed the actress for her carelessness.

He wrote: “Duniya ko gyaan dene mei sabse aage khade ho jaate hain (They stand at the forefront to enlighten the world) ! Dumbness at its best !” 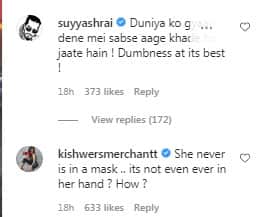 Several fans too pointed out that why the actress is moving without a mask when COVID-19 cases are once again on a rise.

On the work front, Kangana will be seen in Thalaivi – a biopic based on the life and times of late legendary actress-politician J Jayalalithaa. Thalaivi marks Kangana Ranaut’s first trilingual, releasing in Hindi, Tamil and Telugu simultaneously.

Thalaivi is set to release worldwide in Hindi, Tamil and Telegu by Zee Studios on April 23, 2021.

Kartik Aaryan tests negative for COVID-19, goes back to work

Ajaz Khan who is arrested by NCB in drug case, tests Covid-19 positive

Beginner: Are you stuck in programming should not do

Henry Cavill Reprising Sherlock Holmes In Not Just One But Multiple Projects?

BoxofficeAuthority is your news, entertainment, music website. We provide you with the latest breaking news and videos straight from the entertainment industry.
Contact us: contact@boxofficeauthority.com

SpringFest One Fashion Show at the University of Michigan

Xbox One to launch in China this month after all